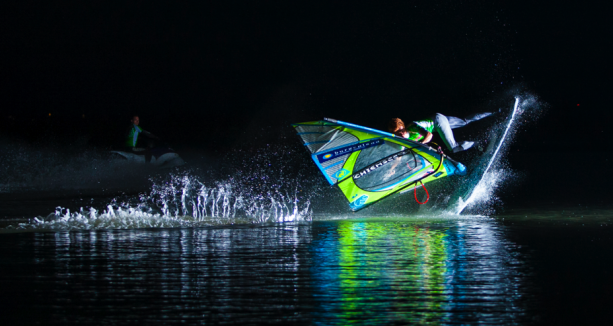 So my 3rd ever PWA freestyle comp and probably the first time I’ve felt comfortable at one of them. I was pretty motivated to do quite well and felt like I had the moves I needed to do so. Yes it is no secret I’ve had a few sessions on the lake in the past months, but never from the direction the wind was during the event. Actually, it was the perfect forecast for sailing under the bridge in Vienna, which was a little gutting as the last time I was there it was epic! Here is the feature about it – boardseekermag.com/features

Back to the event then. Well it was hot, sunny and ok 5.2 weather. From what I have heard records have been set in the amount of people that showed up at the event and that was by the end of Tuesday! The event continues until Sunday and already the shops have sold more then they did in the entire time last year, in the same way that the event beat it’s records from previous year. I think that is a pretty sure sign that this will certainly be on calendars for years to come still.

In terms of windsurfing, we had one good day of not so bad wind and then the rest of the time it was either non-existent or too gusty and light to run heats, despite a lot of attempts. Trust me, no one saw that more than myself. I sailed the first heat that got cancelled, then re-sailed and re-sailed again, then it was cancelled and the day was over, so we were the first to start the following day. We managed to sail the heat straight away. I was pretty stoked with the heat in the end as my score sheets were filled with 8/9’s, the highest I’ve ever had, by quite a bit. It was a motivating start but not really enough to beat my next opponent – Taty Frans. Although I sailed a solid port tack heat, my starboard tack let me down as I could only try/complete two moves due to the light winds. Something I should have mentioned perhaps after the heat. Although I have a sneaky feeling it wouldn’t have made too much difference… Again I was still happy with how I sailed, landing some of my better moves in both heats.

Then came the first attempts at the double, again I was lucky enough to be in the heat that got re-sailed four times. Each time I put down some good moves before it was cancelled, then when it finally came round to the one that counted I got super unlucky with the gusts, always timing it so that I would get up to speed and then already be right on the edge of the heat area. Not ideal when you also want to spot a bit of chop to take off, or a flat spot to spin in!

The Tow-in was a different story. Here is a cool picture though…

Anyway, all in all it was a good event and I’m super happy with my result, I had a pretty encouraging conversation with PWA head judge Duncan Coombes at the end of the event and I got to sail more heats than anyone…

Next up it is back to the UK for round 2 and 3 of the UKWA freestyle tour!