So a quick write up on the event…

Seeing the forecast I decided to head down a couple days early via Exmouth and thanks to google maps for taking me the slowest route possible. The conditions were amazing, fully down the line, with head to logo high sets, probably the best I’ve ever seen anywhere (in real life). It was certainly a good days practice considering as all my wave sailing I do at the moment only seems to happen during competitions.

Competition day (92l RRD Twinfin/84l RRD Hardcore Quad and 5.3/4.9 RRD Superstyle) – the wind pretty much did as forecast and picked up all day…until the final… but with the dropping tide this meant we had some pretty decent conditions for most of the comp. I was pretty careless in my first heat, just going for broke and trying to hit the latest possible aerial I could at the end of every wave, resulting in a lot of crashes. This left it pretty close to the mark and put me a bit on edge. Playing it safer in the second heat saw me score a reasonable early wave but then I couldn’t pull it together for the next wave. So for the rest of the heat up until about 20 seconds to go I was struggling with the one good wave and nothing else particularly special. Getting worked for about 4 minutes with no wind to water-start didn’t help matters. This was after they had already abandoned our heat once already. Anyway with about 20 seconds to go I tacked onto a wave, nothing too big but made the most of it, scoring a small aerial right at the end.

I came in from this heat to hear Scotty had been pretty unlucky in his last heat with not much wind to help him get out and some close out waves. This meant I went into the final already having taken the series title!!! It was good in a sense that I could sail the final just for the fun of it, but I would have liked to see Scotty in the final. As it was I still wanted to win the event and with the Sheridon brothers in the final with myself and Emile Kott (not Lewis… 😉 ) it wasn’t going to be easy. With the wind completely backing off as some rain began to kick in they got the final underway in the lightest of conditions. The waves were still holding up, head high at best, but getting out was a nightmare, and I found myself getting worked for a lot of the heat, having to uphaul to get going and only catching 3/4 waves in 14 minutes. My second wave was quite nice, with a couple of turns and an aerial and then all I could grasp from the other waves was a single nice turn on the shoulder of one wave… So when I came in I had no idea who had got it. It was only when someone mentioned that the only other person to get out was Emile and he had only got one wave that I realised I had clenched the event title as well!!
So overall, super happy with my results this year and really happy with choosing to go for the amateur fleet as waves aren’t really what I practice and this gave me the chance to practice and sail more heats at each event. It certainly wasn’t easy with the battle against Scotty but it was good fun and never too serious. 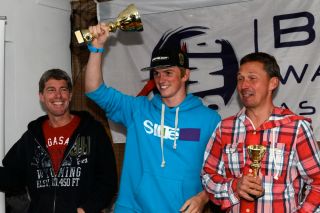 Thanks to everyone that has helped this year, particularly my sponsors providing me with all my RRD needs, Jai and Wouter at SeaSpriteSports and also Mike at TurfDog. Also Jem Hall for some acceptable abuse and good pointers/coaching tips. The support from my parents and girlfriend and all the good work from the guys behind the BWA. Last but not least, good work to Big Davey (fellow RRD team rider) for winning the masters at this event and overall 2nd!